“Culture eats strategy for breakfast” is a phrase attributed to Peter Drucker. While this concept can have both positive and negative implications, we believe that most (if not all) successful organizations share the common trait of a strong, positive company culture. A strong company culture is one that informs each employee’s decisions and actions, both technical (how they work) and relational (how they treat clients, vendors and co-workers). With a strong culture, a diverse group of people can be counted on to work and behave consistently. In organizations with a strong culture, employees tend to self-select; if they believe, they stay on and if they don’t, they leave quickly.

Shortly after joining NWPS I was meeting the team and stopped by a consultant’s office to introduce myself. As I sat down to chat, I noticed a piece of paper taped to the wall. It was a spreadsheet with 4 pennies taped to the bottom and a handwritten note. My curiosity piqued and I had to know the story behind it. 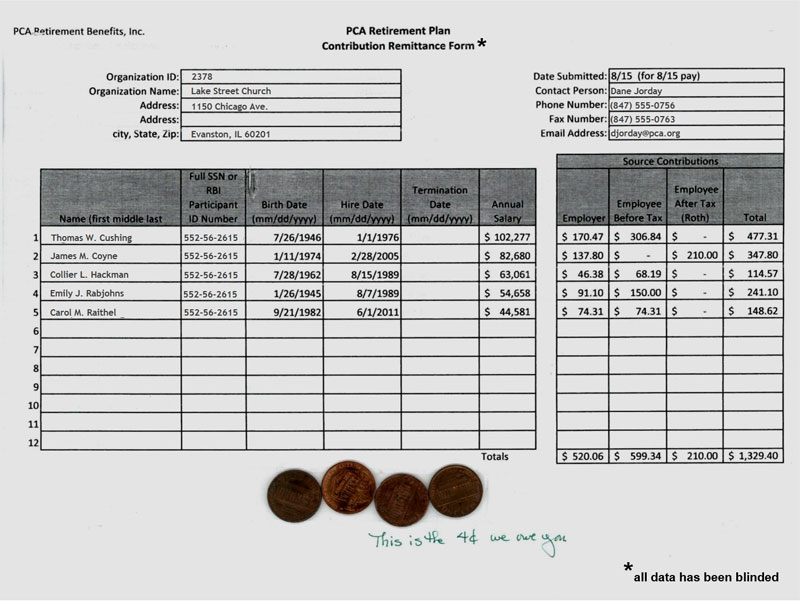 First, some background. NWPS has served The Presbyterian Church in America (PCA) retirement plan since 2009. They were a fit for NWPS because they have a high degree of complexity. PCA’s complexity runs in two dimensions. First, rather than mutual funds, they use separate accounts (multiple managers for each asset class; all socially screened) and custom target date funds. Second, PCA has 800 monthly payroll feeds. Each participating church, school or clinic submits their own (unconsolidated) payroll data to NWPS and contribution to the plan trust.

Managing 800 payroll feeds is a daunting task but we have built an efficient and effective process. We know when each payroll is supposed to arrive at our office, and when each deposit should be received at the trust. If a feed does not arrive on schedule, there will be a phone call to find out why. (You don’t have to make too many phone calls to any one organization before they put you at the top of their weekly to-do list.)

Getting payrolls in on time is half the battle. The other half is making sure the data is right. Every payroll goes through a series of edit and logic checks. Do the totals match? Anyone exceeding contribution limits? Does anyone appear on the payroll twice? Did someone disappear? Only when a payroll passes these edits do we proceed. We do not allow bad data into our system.

One of these edits triggered the “four pennies” story. We received the weekly payroll submission from Betty at the church in Knoxville (names changed, etc.) and the consultant noticed that the amount wired to the trust was $0.04 less than the payroll total. So, naturally, he called. Betty was surprised to be called on a difference of only 4 cents; but that’s how we roll. It’s either right or wrong. A few days later he received a copy of the payroll submission with four pennies taped to it and a note from Betty “this is the 4 cents we owe you”.

At NWPS, every plan on our recordkeeping system is reconciled to the trust positions every night. When our consultants come in to work in the morning, they have a reconciliation report for each plan. If a plan doesn’t balance, resolution is top priority. Plans either balance to the penny or there is a problem.

Because NWPS culture puts such a strong emphasis on accuracy and doing things right the first time, we almost don’t notice it. Like a fish doesn’t notice water. Our focus on getting things right the first time (and the technical, functional and operational processes needed to enable it) is a significant long-term competitive advantage. Not everyone works this way. We do, and we are proud to be obsessed with pennies.